Rossi rules from start to finish in Long Beach

By: Mark Glendenning | 3 hours ago


Displays of complete and total dominance are relatively rare in the current IndyCar era. Sunday’s contest on the streets of Long Beach served up little in the way of thrills, but it might be quite some time before someone puts on a display like the one Alexander Rossi did.

The defending race winner started from pole, quashed a brief challenge from Scott Dixon, stamped out another one on a restart a few laps later, and that was more or less the last that any of his rivals saw of him.

Within a couple of laps of the restart, Rossi had gapped Dixon to the tune of 1.3s. Nine laps later, that cushion had bloated to 4.1s. It didn’t really stabilize until the final stint, and by that point Rossi’s rivals had long lost any say in the outcome. He crossed the line 20.2s clear, giving Andretti Autosport its 200th win in all forms of racing. It was the largest victory margin at Long Beach since Al Unser Jr. crossed the line more than 23s clear of Scott Pruett in 1995.

“It’s an amazing day,” said Rossi. “This is a special one. I just found out that my grandfather died yesterday, so I want to dedicate this to him, and to Michael Andretti for his 200th win.”

It was also relatively processional behind him for most of the afternoon, but Scott Dixon injected a little life into the final few laps, first with a pass on a fuel-starved Ryan Hunter-Reay for fourth, and then a contentious battle with Graham Rahal for third.

Rahal, on cooked tires and out of push-to-pass, was making his car as wide as he could in the final lap to keep the obviously quicker No. 9 at bay and on the track, at least, he was successful — Dixon tried to draft past him on the run to the finish, but fell two-thirds of a car short.

However Rahal’s defending had caught the attention of race control, who called him for blocking before he’d even climbed out of the car. Dixon was accordingly promoted to third.

“It was unfortunate,” Dixon said. “I think he overshot Turn 8 and tried to turn in reaction, and the rule is that you can’t go back to defend if someone is already there. I was on OT [push-to-pass] and hit his rear tire and lost momentum and had to lift, and that turns OT off was well.”

Rahal, for his part, took his penalty stoically.

“Well, it’s not that tough to swallow,” he said. “We were going to lose the spot anyway. My fronts were absolutely gone. I had no braking grip whatsoever. I moved exiting the corner and gave him a lane.

“I’m not upset about it. We had a good day. The car wasn’t great, but it was decent. Did I block? Yes, I blocked. You’re allowed to block in this series — you can make a move, and I made a move. There’s a lane. He had overtake, I didn’t, so if he wanted to go, he could go. We’ll discuss it with the officials later. If they don’t want blocks, they need to say you can’t do it at all and change the rules. At the end of the day, P4. Did we deserve P3? Probably, but it was still a good day.”

Dixon wouldn’t have been in the position of needing to get past Rahal — or Hunter-Reay — had it not been for a problem during his second stop when the fuel probe refused to connect. He’d already been in recovery mode during his second stint after being leapfrogged by both Will Power and Josef Newgarden during the first round of stops.

A good battle with Power was settled in Dixon’s favor when Power overshot the first corner and skidded into the escape road, and with a pair of stickered reds waiting for his last stint, he hauled his way back toward the front, ultimately finishing one position short of the second place that he thought the car was worthy of.

By contrast, Newgarden’s cruise to the runner-up spot was relatively uneventful.

“We had a good strategy,” he said. “We leapfrogged Will and Dixon. I was giving my all — that was all we had today. This is a good day, but it’s also tough. [Coming up] a little short is always disappointing. Every weekend is about maximizing what you’ve got, and today, second felt like the maximum. Now we need to figure out how to get a first-place car and maximize that.”

Hunter-Reay rounded out the top five. “It was a bit of a shock at the end, [the team] said we had to go to full emergency mode fuel saving,” he said. “It definitely caught us by surprise. Today came down to qualifying — there were not a lot of yellows, so it came down to qualifying and clean air. Clean air was a big deal today, and we didn’t have any.”

Simon Pagenaud had a brief scrape with Hunter-Reay at the first corner but then enjoyed a relatively trouble-free run to sixth ahead of Power, who’d had to overcome an overboost problem in addition to his mistake.

“I guess it was my mistake to go into the marbles,” said Power. “Went to the wrong side to defend Dixon. Probably a podium finish there, and threw it away. And unfortunately I had an overboost. For whatever reason… I had a new engine in last night and you need to get all the little tolerances right — and they weren’t quite right.”

Elsewhere, Colton Herta endured a frustrating afternoon, starting with a pit stop in which he was almost ran over a wheel gun that had been left in front of the car, stopped just in time, and then stalled. Worse followed few laps later when he caught too much of the curb at Turn 9 and hit the outside wall, causing enough damage to his front-left to put him out of the race.

“I just feel terrible,” said Herta, who had run inside the top 10 during the first stint. “The car was so quick, and I kind of threw it all away. I feel really bad for the guys. We were going to be able to go a few laps longer than the other guys, and had such good pace.”

The only caution period came right at the start, when Marcus Ericsson and Jack Harvey made contact near the fountain, and Spencer Pigot tagged Zach Veach just ahead of them. The yellows came out to allow Harvey’s car to be retrieved from the flowerbed, and Ericsson was issued a drive-through for causing avoidable contact.

Marco Andretti will pay tribute to his grandfather by wearing the dayglo red color Mario Andretti drove into Victory Lane at the 1969 Indianapolis 500 on the No. 98 U.S. Concrete/Curb Honda.

NTT IndyCar Series rookies learn what ovals are all about at Texas test
By Joey Barnes | Published: Apr 20, 2019 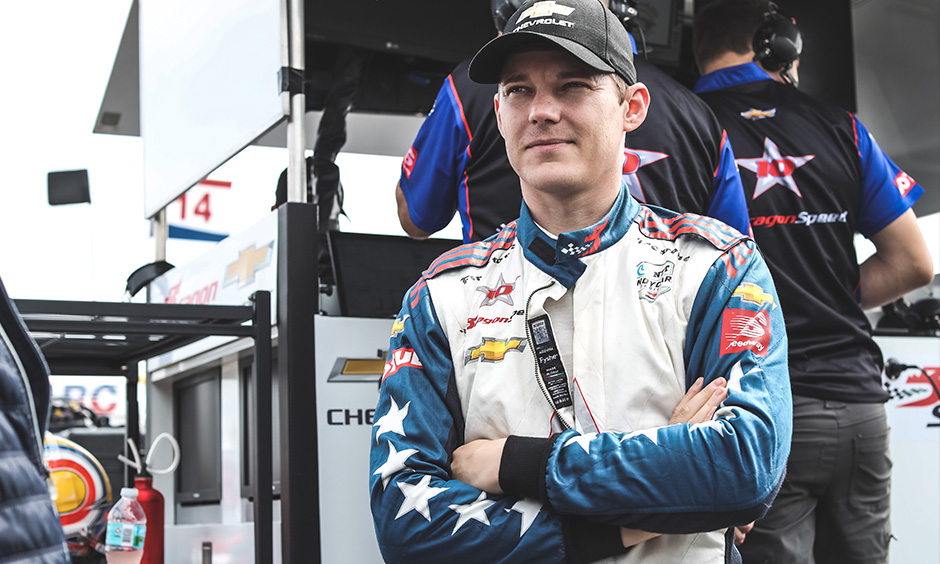 FORT WORTH, Texas – It was an oval inauguration for a trio of NTT IndyCar Series rookies as they took to the high banks of Texas Motor Speedway on Friday.

Ben Hanley, Colton Herta and Marcus Ericsson endured the daunting task of finding the right blend of comfort and pace despite wind gusts of up to 30 mph in chilly conditions around the 1.5-mile oval, which hosts the DXC Technology 600 on June 8.

While the outing was significant for all three, it was especially meaningful for Hanley. The 33-year-old Brit has been spearheading the effort put forth by DragonSpeed Racing, the newcomer NTT IndyCar Series team scheduled to run five events in 2019, including next month’s 103rd Indianapolis 500 presented by Gainbridge.

“(It’s) like nothing else,” Hanley (shown above) said of his first taste of an oval. “You watch the (camera) on-boards and stuff and you think, 'Yeah, yeah, yeah,' but then it's a completely different sport.

Although he came out of the cockpit of his No. 81 10Star Chevrolet as calm as usual, there was a different feel at the start of the day.

“The biggest thing is relaxing into it,” Hanley admitted. “The first few laps, I was mega tense and really gripping the wheel. I kept telling myself to rest the head, but at first it's difficult.”

Unlike the veteran drivers and teams that already have a feel for what is needed when they unload at a track, Hanley had to gain his own feel for a baseline as he and DragonSpeed progress to adding setup adjustments.

“Each run, we'll make a small change,” Hanley said. “I know where I'm improving myself on the oval.

“We've not got much time, so we have to make the changes, but we don't want to make any big changes and it cost us track time with an incident or something. So we're just making a lot of small changes and seeing how the car reacts to those. Hopefully, that will be in the bag when it comes to the next month and when it is time to push a bit more.”

Herta, driver of the No. 88 Harding Steinbrenner Honda, has previous experience running on ovals from his two years in Indy Lights presented by Cooper Tires – the top rung of the INDYCAR-sanctioned Road to Indy development ladder. While that could be used as a point of reference, it did little to aid the learning curve on a “challenging” circuit.

The 19-year-old Californian managed to find pace quickly, but most of the thought process was to use the Texas opportunity to prepare for the all-important open test at Indianapolis Motor Speedway on Wednesday.

“That's the thing we're trying to get ready for,” Herta said. “Doing a bit of my rookie orientation here, so then when I get to Indy, it's less of a list. Just getting laps under my belt, getting myself comfortable at that speed. Obviously, we don't run as fast as Indy here, but it's pretty damn close. On the straights you still get to 225 mph, so it's still extremely fast.”

After months of anticipation following his arrival from Formula One, Ericsson finally learned what driving on an oval was all about. The 28-year-old Swede was able to rely on veteran teammate James Hinchcliffe to shake the No. 7 Arrow Schmidt Peterson Motorsports Honda down before climbing in.

“One, the speed is so high and then, two, is that it's a different feel in the car,” Ericsson said.

“With all the banking, you need to learn to trust the car. When you don't have any experience of it, you don't really have that trust. You need to build that up, and that's only coming from doing laps. You can talk so much about it, but it's actually laps that makes the difference.”

The acclimation was vital since all three rookies’ first NTT IndyCar Series oval race will be the Indianapolis 500 on May 26.

“It's super important because the month of May is coming right now,” Ericsson said. “My first oval race will be the 500, so it's a big challenge. That's why it's good to come out here. There's only three cars out and it's pretty chill out and just a good environment to get up to speed.”