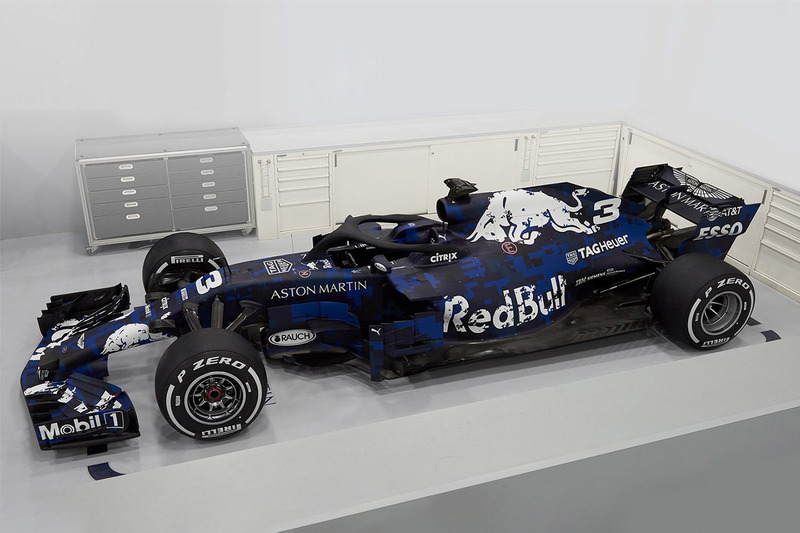 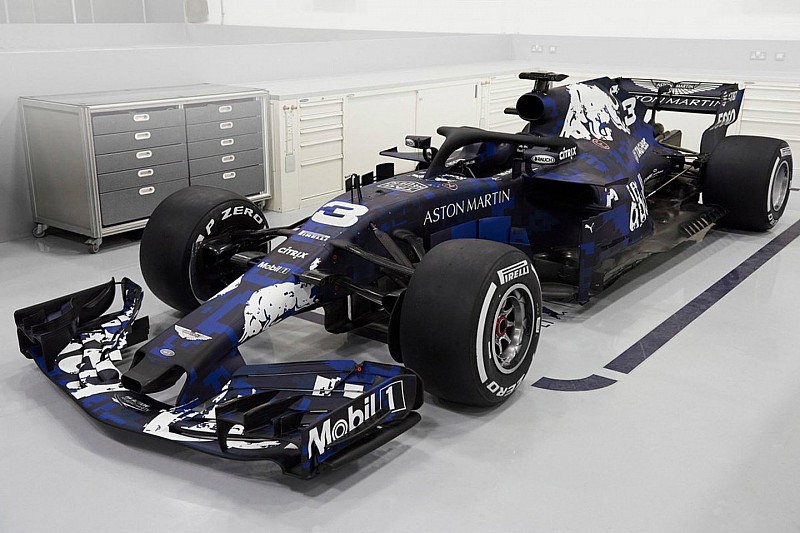 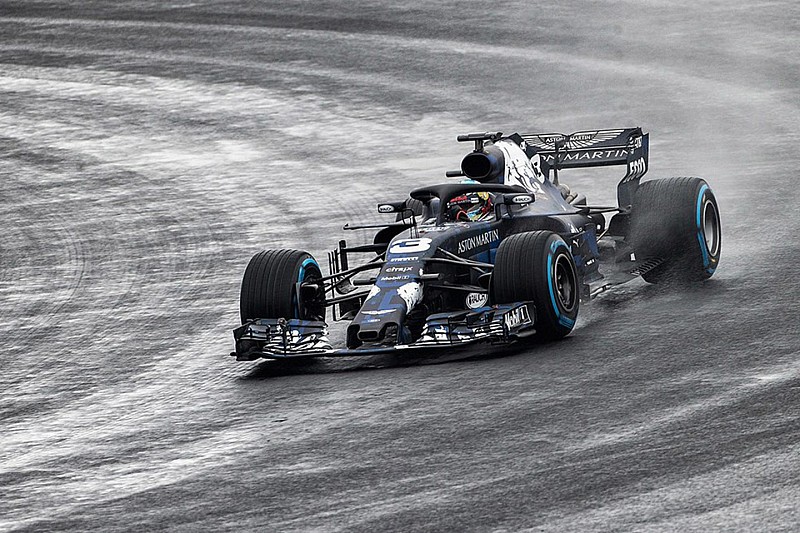 Red Bull reveals its 2018 Formula 1 car Red Bull Racing has become the latest Formula 1 team to unveil its new car ahead of the upcoming 2018 season.

The new challenger, the RB14, will be piloted by Max Verstappen and Daniel Ricciardo, who combined for three race wins with its predecessor last year.

Fitted with the mandatory halo cockpit protection device, the car has been unveiled with a striking blue camouflage-style livery instead of the familiar red and dark blue concept the team had used for the past two seasons.

However, Red Bull has made it clear the livery is "special edition", and that the paint job that will be used in race trim will only break cover at pre-season testing in Catalunya.

Despite that, the blue paint scheme should make it to the track after all, as it appears likely be used by Daniel Ricciardo in a filming session at British GP venue Silverstone.

British car manufacturer Aston Martin has prominent branding on the camo livery, and the RB14's rear wing in particular. The marque will serve as Red Bull's title sponsor in 2018, having decided to step up its involvement with the F1 outfit.

The Milton Keynes outfit has customarily left its car launch as late as possible before the start of winter testing, but eschewed that tradition this year with a February 19 reveal.

It is the third team on the grid to show off its new design, after Haas and Williams.

"The pattern of the last few years has been to launch 'aggressively late'," Red Bull's announcement read. "This has allowed the design department the maximum amount of time to add goodness to the car before the cut-off point at which the design is frozen and a launch car produced.

"It's been not uncommon to have the car finished, fired up for the first time and shipped to Spain for the start of testing all on the same day.

"It's preferable to finish the car early and deal with any snags now, when the car is on a track a short drive from the factory, rather than using up one of our eight ultra-precious test days doing the same at the Circuit de Catalunya."

The RB14 will be powered a Renault V6 turbo hybrid, which will remain branded as TAG Heuer for a third straight season.

It is likely to be the last Red Bull F1 car carrying a Renault engine, as the French manufacturer is set to pull out of its long-time engine supply deal with the Austrian outfit at the end of the year.

Ricciardo shakes down RB14 at Silverstone Daniel Ricciardo has given Red Bull's new 2018 Formula 1 car its first shakedown run during a filming day at Silverstone on Monday.

Despite bad weather at the British track, Ricciardo was still able to help his team become the first to run a car this year, with other outfits having so far only released images of their challengers.

Due to the nature of a filming day, Ricciardo will be limited to just 100km of running at Silverstone, but it should be enough to iron out any early niggles prior to the start of official F1 pre-season testing at Barcelona in Spain next week.

The RB14 is running in a test livery for now, with its definitive 2018 colours set to be revealed ahead of proper running next year.

The car features a number of intriguing design concepts, with some particularly aggressive solutions around the sidepods.

Has bold-looking Red Bull repeated its 2017 mistake? Last year Red Bull's much-anticipated Formula 1 challenger was a little underwhelming in launch trim. Its successor's bold special livery has turned heads, but is it also disguising an unspectacular design beneath?

Red Bull will decide in the first half of 2018 whether to switch to Honda power next year.

After the McLaren-Honda divorce, the Japanese engine supplier has moved on to Red Bull's second team, Toro Rosso.

Dr Helmut Marko, the Red Bull official, said he has been "positively surprised" with what he has seen from Honda so far.

"So far we're positively surprised by Honda, also in terms of their dedication and enthusiasm," he told Auto Motor und Sport.

"I think they have learned from the mistakes that certainly happened.

"So far, according to the test stands, the engine is reliable. I think it will be possible for the engine to catch up to Renault level by mid season," Marko added.

And if that happens, Red Bull is likely to make the switch from Renault to Honda for 2019.

"The regulations have changed so that you have to announce what engine you want to compete with the following year by the summer," said Marko.

"We will analyse thoroughly and then make a decision." 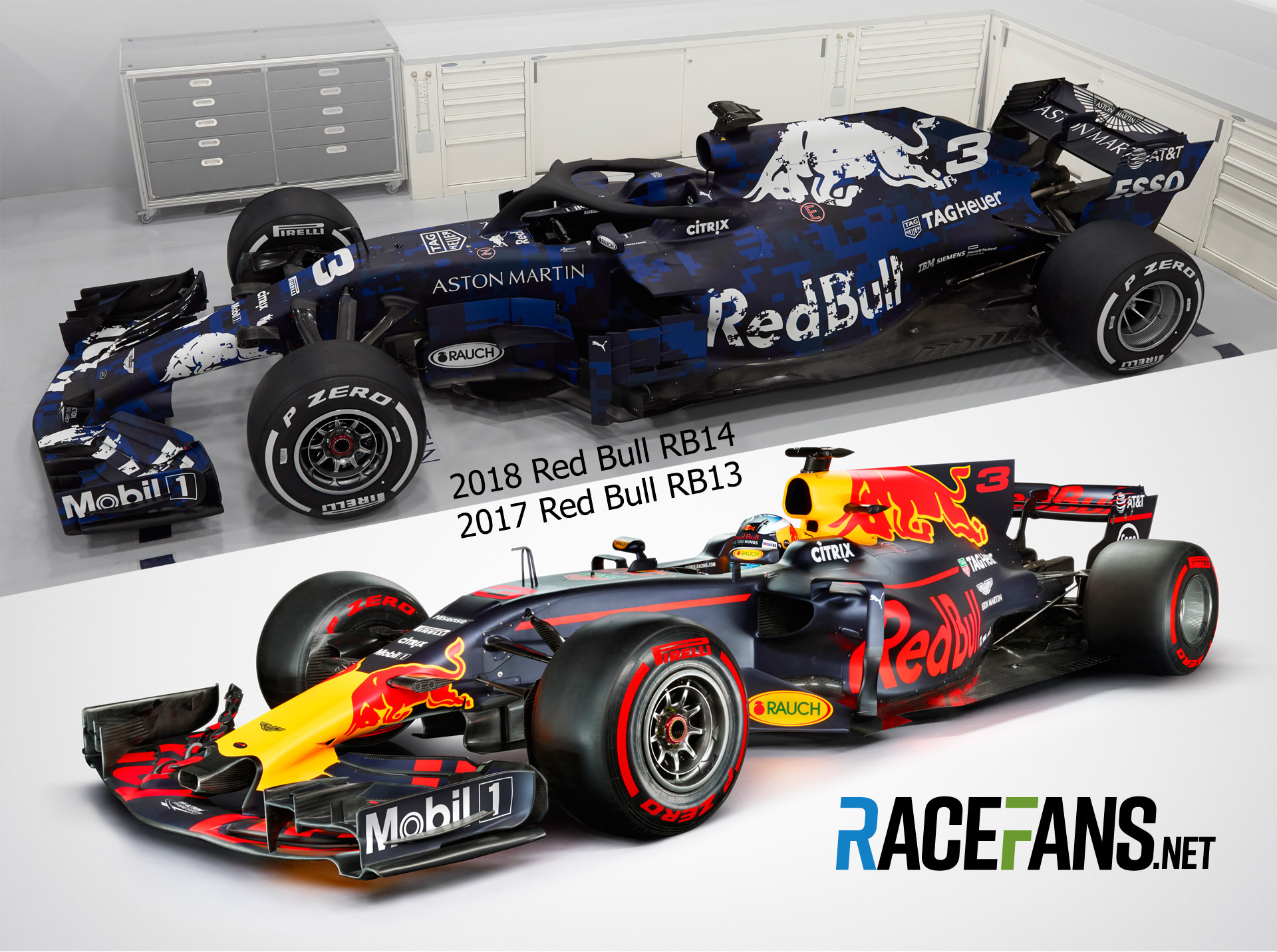 Mercedes has won 63 grands prix and swept to four consecutive drivers' and constructors' championship doubles since F1 switched to turbocharged V6 hybrid engines for the 2014 season.

Red Bull has only won eight races in that time as engine supplier Renault has proven inferior to both Mercedes and Ferrari.

It has traditionally pushed the build of its car to the last minute to maximise design time, but brought forward its launch this year and has already completed a shakedown at Silverstone ahead of the first pre-season test next week.

Despite the extra push on the chassis side, Marko fears Red Bull's newly-launched RB14 may not be enough to challenge for the 2018 championship.

"The [Renault] engine should be more reliable and more powerful this year, and we will have a competitive chassis from the beginning, but Mercedes is building a new engine," Marko told Auto Motor und Sport.

"It might be that their advantage will then be even bigger.

"If the [Renault] engine lives up to the promises that have been made, we should definitely be closer to Mercedes.

"It doesn't make any sense if you find a couple of hundredths of a second in the last 14 days.

"It is more important to be well-prepared for the season."

The battle between Red Bull drivers Daniel Ricciardo and Max Verstappen has been billed as one of the 2018 season's main talking points, with Lewis Hamilton and Sebastian Vettel the established team leaders at Mercedes and Ferrari respectively.

Asked if it was an advantage for Red Bull's main rivals to concentrate on one driver each, Marko reiterated his point that his team is unlikely to be in a title-challenging position anyway.

"That is an advantage, but if you have two equally strong drivers they will push each other to the highest performance level," he said.

"And they will also push the technicians and the chassis to the highest performance level.

"If you only have one driver who is at the limit, then you never really know where you are.

"It is a disadvantage if your drivers take away points from each other, but I believe we are not in the situation to go for the title already this year."

Red Bull says its plans for Formula 1 pre-season testing remain on course, despite Daniel Ricciardo slightly damaging its new RB14 in a filming day crash at Silverstone on Monday.

Ricciardo was giving the team's striking-looking 2018 design its first run at a wet Silverstone just hours after the first images of the car were released.

But the team had to cut short running before its 100km limit was reached because Ricciardo crashed out in the damp conditions, hitting the barriers at low speed.

Although the Australian escaped unharmed, sources suggest the impact was enough to damage the front of the car, including the suspension, nose, front wing and floor.

With teams normally tight on spare parts at this time of year, such an incident could have compromised preparations for the first official pre-season test at Barcelona next week if replacements could not be readied in time.

But with Red Bull having a week to get back in action, a team spokesman confirmed on Tuesday that everything would be fine for Barcelona.

The team will likely accelerate its spare parts programme to ensure that the RB14 is fully prepared for the beginning of testing action next week. 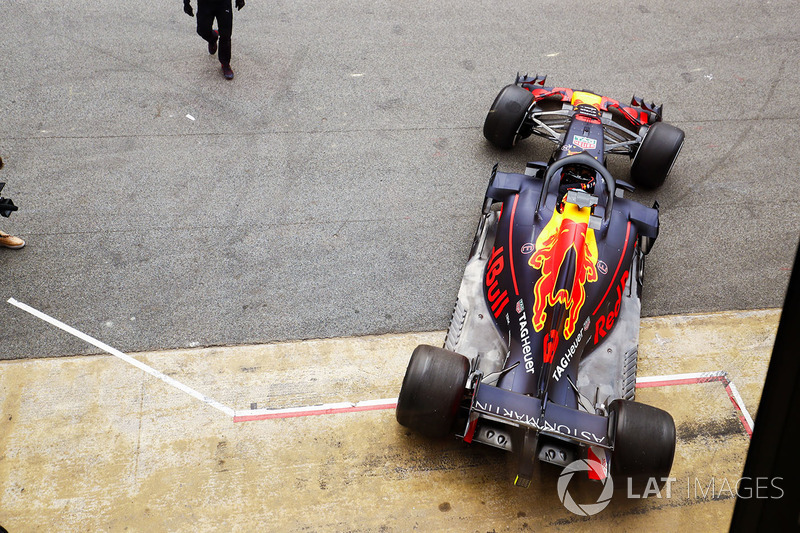 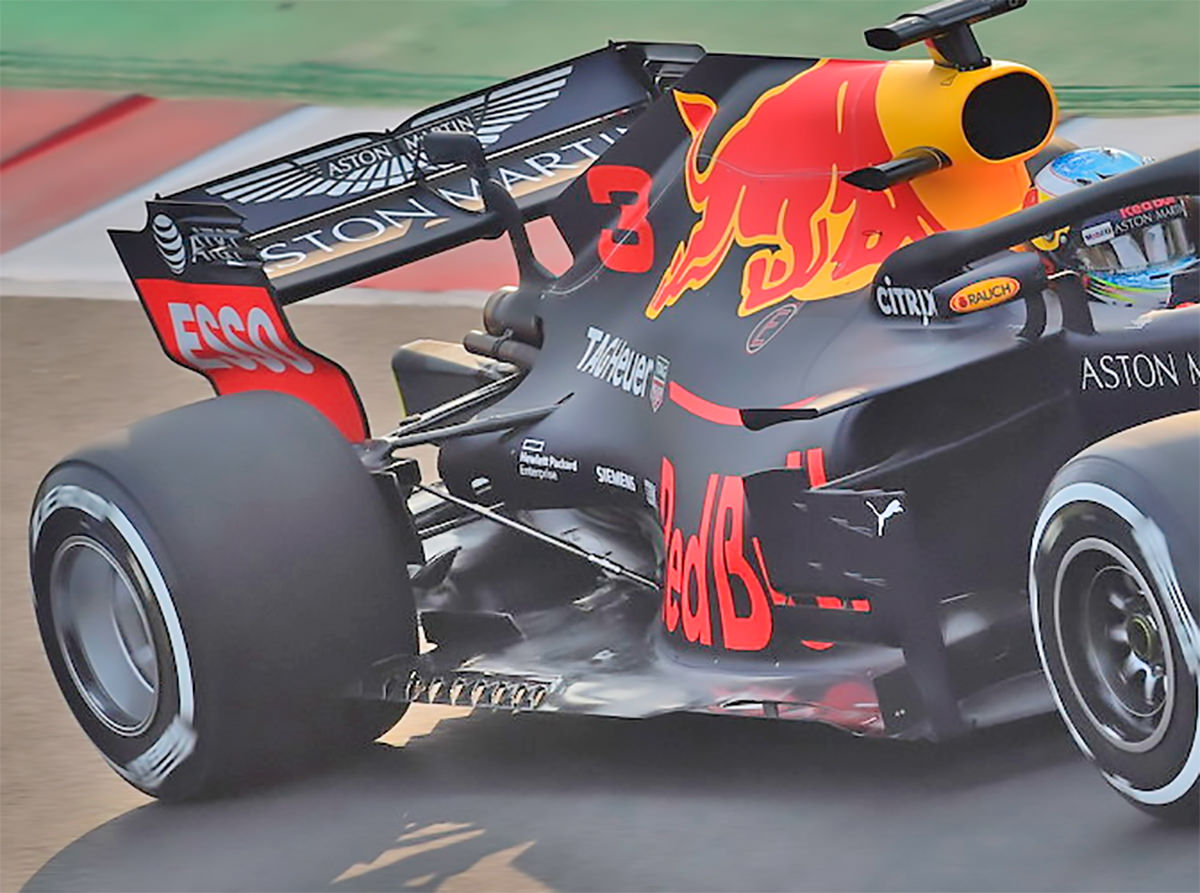