35 replies to this topic 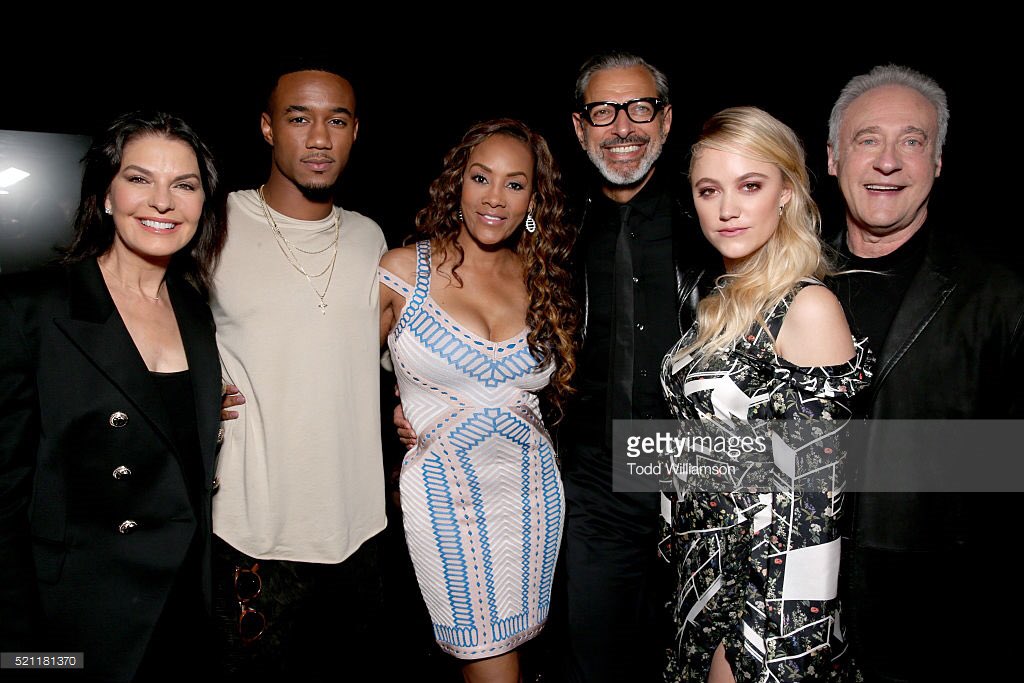 Even if you are a huge Independence Day fan, that first trailer may have left you scratching your head. It looked cool, but it didn’t quite live up to the pinnacle of spectacle that was blowing up the White House. A new trailer shown at CinemaCon 2016, however, does.

We start with a massive celebration. It’s the 20th anniversary of the War of 1996 where humanity triumphed over the aliens. The crowds are huge, and you notice right away that all the buildings, vehicles, weapons, and more are inspired by alien tech. The new President talks about how, because of the attacks, they’ve been able to build a stronger, safer Earth.

That technology seems to discover something. A distress call, sent by the aliens and now the Earthlings know: “They’re coming back.” We see Bill Pullman’s character, Jeff Goldblum’s, all the usual suspects. A set of alien-influenced human ships fly to the White House.

We also get our glimpse of the new alien ship. The problem is, you can’t really show it in a single frame because it’s so big. One is the size of the entire Atlantic Ocean. And something that size has its own gravity, so that’s why major cities start to get sucked up into the air. “What goes up must come down,” Goldblum says, as the cities come falling down.

There are shots of tens of thousands of alien fighters flying around. Through the skies, protecting military assets, mass insanity. Cities being destroyed. Soldiers band together and declare, “We must remind that that Earth is not for the taking.” Someone explains that in the 20 years that have passed since the invasion, humans have raised a generation who believes they can win. However, Goldblum thinks this time, the war is not winnable. Pullman reminds him, it wasn’t last time either. It will require sacrifice.

Among the chaos and destruction, there’s a shot of what looked like a huge leg crashing down into the street. We assume this is some kind of mega-alien, kaiju type thing. Having not just big ships, but big aliens to fight is definitely on way this movie can expand on the first one.

The trailer ends with Liam Hemsworth’s character flying low through the rivers of London, as the city burns and major landmarks fall all around him. “They like to get the landmarks,” Goldblum says.

Director Roland Emmerich hinted this trailer was specially cut for CinemaCon so, we aren’t sure if it’ll be online. But some kind of new trailer should be online soon as Independence Day: Resurgence opens June 24. 20 years after Will Smith greeted an alien by punching it in the face, those other-worldly creatures finally got their act together enough to give it another go in their efforts to destroy our planet. This time around Will Smith is not joining the fight (his character was killed in an accident, according to the sequel's viral campaign), but Independence Day: Resurgenceboasts returning cast members like Jeff Goldblum, Vivica A. Fox, Bill Pullman, Brent Spiner and Judd Hirsch -- not to mention franchise newbies like Liam Hemsworth, Sela Ward, Maika Monroe and Jesse Usher.

We sat down with a bunch of the cast earlier this month in Las Vegas at CinemaCon and found out a few things about the sequel twenty years in the making.

There will be other kinds of aliens

The original Independence Day seemed to focus on just one species of alien, and we didn't really know much about them other than the fact that their entire fleet could be taken out with a computer virus. Not so in the sequel. "We learn quite a bit about the aliens,“ Jesse Usher says. Usher will play the son of Will Smith's character in the film; a fighter pilot, like his dad. "What else is out there? What hasn't visited earth yet? They start to delve more into that, too," he adds.

“And we also learn that there might be other species, too. Not just those aliens," Maika Monroe adds. Monroe, who burst onto the scene following a starring role in the cult horror favorite, It Follows, plays the daughter of Bill Pullman's character and the former first daughter.

Speaking of Pullman, will there be another iconic Presidential speech?

One of the most memorable moments in Independence Day was Pullman's speech prior to battling the aliens. Here, let us refresh your memory...

Pullman is no longer the president in the sequel; instead Sela Ward plays the first female president in United States history. So does she also get to rock a badass speech? "No, you can't mess with that speech," she reveals. "They didn't even try -- that [original speech] is so iconic. People use it all the time -- at the opening of sports games and weddings, and I saw it on a Budweiser commercial recently. You can't compete with that. But she's really smart, strong and has a great job."

Ward reveals that her character's entire family was killed in the first alien invasion, and so she's definitely a President who isn't afraid to fight back... hard. "It’s a completety different world that she’s operating in. She’s very strong, decisive, and not afradit to use force. All of her family were killed in the first invasion, so her whole life is about protecting and empowering her country. In this film, she really becomes the leader of the world."

No iconic speech, but there will be more memorable one-liners

One of our favorite lines from the first ID4 is when Will Smith punches the alien in the face and shouts, "Welcome to earth!" We asked Usher -- who told us he never had a chance to talk to Smith about the role -- if his character also gets cool lines like his movie-father.

"I do! One that I like -- and I believe it's in the trailer -- is when I get to say, '“It’s the fourth of July – let’s show ‘em some fireworks!” Usher adds, "What this film does do is it brings to light a lot that wasn’t really touched upon in the first film. We know there were these aliens and there was a big fight, but we were left with a lot of unanswered questions. And in this film we answer a lot of those questions."

The craziest scene in the movie is...

Of course an Independence Day movie has to have an epic alien battle, and not surprisingly the film's two young stars tell us that is going to be a defining moment for the summer movie season.

What will also be impressive -- according to Monroe -- is the Queen alien in the film. The original Independence Day never really introduced us to a leader of the alien race, only the fact that they were taking commands from a mothership. This time around we're getting all up close and personal with the woman in charge. "The size of the alien – our Queen alien – and just battling that. The CGI on this is absolutely insane, and I think fans are going to be really excited by that," Monroe teases.

Fear not, if Independence Day: Resurgence does well at the box office and with fans, we will most certainly see more.

"I think what they have in mind is that if this well enjoyed, then they have some ideas," Golblum says. "And there may even be an artful reference towards the end of the movie of what could [happen next]. It sets up the possibility that it’s not over – that the fat lady has not yet sung."