A first time participant in the provincial elections and newcomer to the senate becomes the biggest party in the land in one fell swoop. It’s not something the Netherlands has ever experienced before, says columnist Syp Wynia.

Forum voor Democratie, the party of Thierry Baudet, Henk Otten and Theo Hiddema, all of three years old, scorned by politicians as well as the Hilversum media, was hoisted to the top of the political tree by the voters. It is now the biggest in a number of provinces and the city of Rotterdam. The political establishment can no longer ignore it, lest it wants Baudet’s party to become a bigger winner still, starting with the European parliament election on May 23. The VVD miraculously managed to hold its own, although the party scored the worst provincial election results since 1970. Not so the other parties traditionally at the heart of Dutch politics. CDA and PvdA did poorly as did D66, a trend that started in 1989. Never before could ‘right wing populist’ parties (FvD plus PVV), count on the support of over a fifth of the electorate. The PVV lost, by the way, as did the SP.

VVD, but mainly PVV deserters Forum’s electoral gain is mainly down to voters who deserted the VVD but even more to former PVV voters. Pollster Maurice de Hond found that new FvD voters are predominantly male, between the ages of 35 and 64, have a mid to low educational level and an above average middle income. A relatively large number of non-religious people and (former) Catholics voted FvD which confirms the trend that it’s the latter group which is determining the direction of politics in the Netherlands. Forum voters are not, in the main, people who read newspapers (although many of them read the Telegraaf, the Algemeen Dagblad and the Financieele Dagblad) which confirms the impression that Forum is mostly geared towards communicating via the internet in general and social media in particular (Facebook, Twitter, YouTube). At Forum meetings in the last couple of weeks disappointment about the ‘prejudiced talk shows’ of the Hilversum broadcasters abounded with people saying they would get their information on YouTube. And yes, in the final run up to the election, the disdain for Baudet, Hiddema and Forum in programmes such as De Wereld Draait Door (DWDD) was particularly palpable. The broadcast on March 19 was almost an orgy of Forum aversion. Baudet was a ‘rat catcher’ and Hiddema a ‘louche lawyer’. One of the more considered comments was made by columnist Özkan ‘Eus’ Akyol who warned that Forum sympathisers would see this carping as another sign that they are up against not only a ‘party kartel’ but a ‘media kartel’.

Why did Forum win?

FvD’s meteoric rise is a result of how Baudet and his friends presented themselves but even more by how the established parties presented themselves. At the time of the national elections two year ago, voters were only marginally interested in climate and debates on the subject were few and far between. But the government agreement put together by VVD, CDA, D66 and ChristenUnie suddenly turned the Netherlands into the world’s leading champion on climate.  Months later all homes were to be gas free, the bill for which was to be largely paid by the population which, relatively speaking, is not the greatest source of CO2 emissions. Initially Forum was the only party to dispute the government climate stance. Not only did Baudet criticise the high cost of climate policy, he also questioned the United Nations’ IPCC panels’ prevailing views and those of the Paris agreement. The mendacious energy bill was a godsend for Baudet. Baudet also took aim – albeit not as straight an aim as he used to in the last few weeks – at the European Union: the Netherlands should leave. And immigration should be modelled on the Australian system. Only those who can make a contribution will be allowed into the country, if not the doors remain closed. And in general, the Netherlands and western civilisation as a whole, should stop blaming itself and be less self-effacing. Forum seems to grow because of a dichotomy between a trend for re-nationalisation and a movement towards handing over more power to Brussels and the United Nations. The Marrakesh migration pact – supported by most MPs- was also seized on by Forum and that unconventional but reasoned opposition helped Forum in this year’s provincial election.

The ‘cartel parties’ helped too

The traditional parties actively contributed to Forum’s success. They supplied the ammunition by focusing on climate(and the business climate, in the case of VVD and CDA) and not purchasing power after years of austerity. The ban on gas in homes, the ambition to be climate champion, the Marrakesh migration pact, none of these were put to the voters. What is more, the referendum was abolished by Rutte III (and defended by none other than D66). The results of the provincial elections bear more than a passing resemblance to the rise of Pim Fortuyn in 2002. Baudet even displays a little of the intellectual debater that Fortuyn was while at the same time appealing to ‘the man in the street’. At the same time it is surprising that the VVD, Baudet’s most important target, did as well as it did. Perhaps both parties benefitted from the Utrecht attack, Baudet by opposing the The Hague ‘cartel agreement’ not to continue the campaign and VVD leader Rutte by showing his leadership qualities as a prime minister. 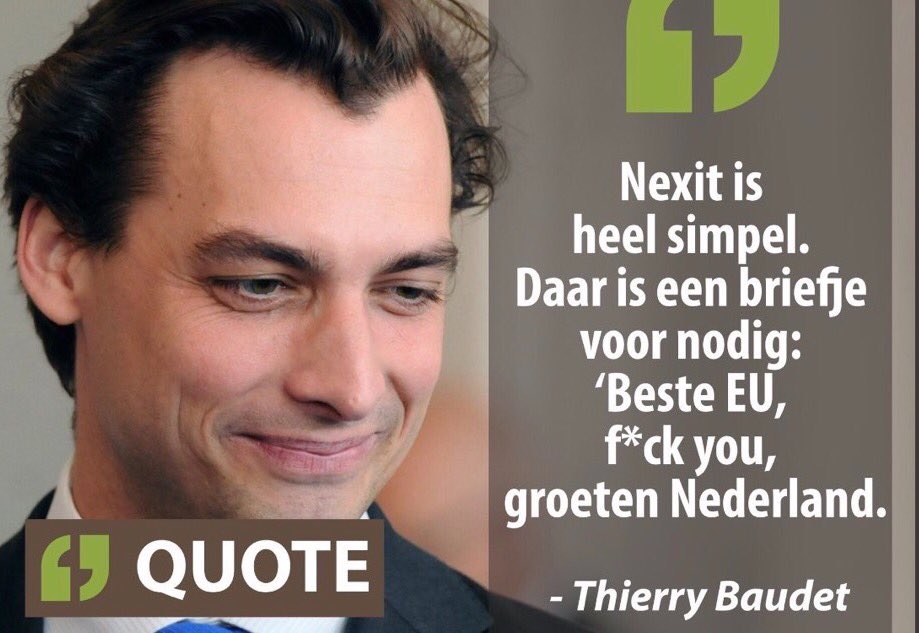