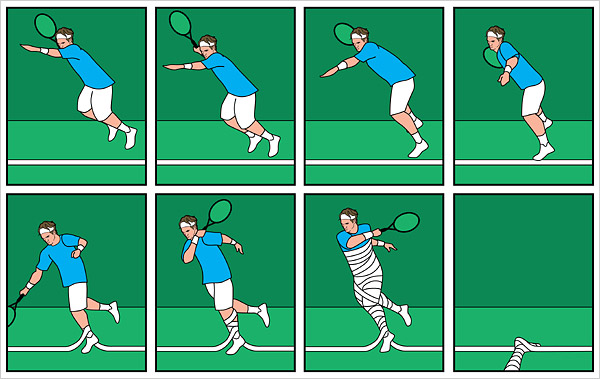 By MICAH COHEN and JULIET MACUR

We know Roger Federer is friends with Tiger Woods. We know that his girlfriend of seven years, Mirka Vavrinec, is a former professional tennis player. We know he has been ranked No. 1 in the world since Feb. 2, 2004, a record streak.

What no one seems to know about Roger Federer is how to beat him at the United States Open, where he is undefeated since Sept. 4, 2003.

Micah Cohen and Juliet Macur of The New York Times invited a heavyweight boxer, a physicist, the father of famous tennis sisters and others to explain how they would beat Roger Federer.

WLADIMIR KLITSCHKO, heavyweight boxing champion and a friend of Federer’s:

First of all, he’s my friend, so I wish he’s going to win, but we stipulate.

You can kiss his girlfriend, and maybe he’d get jealous, you know, he’d get upset and whatever.

Put a sleeping pill in his drink so that he barely can walk on the court. Ambien works pretty good.

DR. ROLAND CARLSTEDT, chairman of the American Board of Sport Psychology:

My research on over 1,000 athletes, including hundreds of ranked tennis players, has isolated three psychological factors that are the most critical factors in driving peak and critical-moment performance, choking tendencies and overall mental toughness. The measures — hypnotic susceptibility, neuroticism and repressive coping — work together to mediate brain-mind-body processes that underlie technical performance.

If I were to assume that Roger Federer has the ideal profile, there are still minor vulnerabilities associated with this profile, including the tendency to know it all, lessened coachability and annoyance with those who dare challenge or contest athletes with this profile. These characteristics may explain why Federer has been without a coach for much of his career — something that could eventually haunt him by preventing him to conceptualize ideal game plans and also prevent him from accessing psychological interventions that can help all athletes enhance recovery, sleep and immune function.

The best way of increasing the odds that a player could beat Federer would be to prime him psychologically through advanced mental training techniques to carry out a meticulously and scientifically based game plan that is designed to expose Roger’s minute weaknesses. By engaging in sophisticated and high-tech approaches to motor training and mind-body control, procedures that I have validated through extensive testing, a player who can last and go toe-to-toe with Roger or even pull ahead of him has a chance of winning.

The ability to stay with Federer game after game is something that can impact a player with the ideal athlete’s profile, since they are not used to being tested or having their high level of self-confidence and self-esteem attacked head-on.

Oh, gosh, I don’t know how I could beat him. I guess I would have to tie his legs together so he couldn’t move. If that didn’t work, I would wear a short skirt, and hopefully that would distract him.

DIEGO AYALA, professional coach who, as a player in 1996, defeated Federer at the Coffee Bowl juniors tournament in Costa Rica.

Beating Roger Federer at the U.S. Open has been pretty impossible the last three years, but I think I have developed a foolproof plan to beat him:

1. Find out what restaurant he is eating at the night before the match and throw some Ex-Lax or Visine in his water a la “Wedding Crashers.”

2. You could mess up his wake-up call, to give him one every hour.

3. Bribe the stringers at the tournament to string his rackets at the worst tension possible.

4. Create a roadblock so he cannot get to the tournament. I’m thinking maybe blocking both exits of the Midtown Tunnel while he is in it.

5. If he somehow still manages to get to the courts, have somebody there ready to go Tonya Harding on him!

HOWARD BRODY, emeritus professor of physics at the University of Pennsylvania and author of the book “The Physics and Technology of Tennis.”

Roger Federer is a difficult tennis player to defeat because he has no obvious weak spots in his game. One way to increase the chances of defeating Roger Federer is to reduce the number of unforced errors you make.

But how do you know which of your shots are more likely to go in (be good)? There is a computer program which evaluates a shot’s probability of going in. It allows you to change how hard you hit it, change the spin, how high above the court the ball is struck, where on the court you are hitting from, where you are aiming your shot (crosscourt versus down the line) and allows you to see the relative chance of that shot going in.

This computer program uses the laws of physics (Newton’s laws of motion) to compute the ball trajectories for a given input and tells you how risky or safe that particular shot is.

RICHARD WILLIAMS, father and coach of Venus and Serena Williams.

There’s only three ways to beat Roger Federer. You first pay him enough money not to show up — that’s the first thing you do. If he turns that down, then you try your best to get a baseball bat and break his leg because he runs so fast. Now, if he gets away from you, then the next one is, honestly, is just to sit like I do and watch him play, then you can beat anyone just sitting in the stands because you never miss a shot. Those are the only three ways I know you can beat Roger Federer.