Daer fierdns,
Aocdrnicg to a rsecareh at Cmbagrdie Uinervtisy, it denos't mtater waht oredr the ltteers in a wrod are, the olny iprmoatnt tihng is taht the frist and lsat ltteer be at the rghit pclae.The rset can be a total mses and you can sitll raed it wouthit porbelm.Tihs is bcuseae the huamn mnid deos not raed ervey lteter by istlef, but the wrod as a wlohe. Fkcnuig amzanig, huh?
Cehers

It was summer, and the butterflies were on wing. I noticed an eagle in the sky, I watched it. It spiraled around, and landed on a tree. Soon then I found myself, at the top of a mountain... higher... higher... fast forward the future

And you wonnt need people teeling you that you are crazy

How to play: Use the arrow keys on your keyboard.
Game synopsis: The Penguin must catch the Lola magazines falling from the Pigeon flying above.
Revolutionary cause: The Penguin must read as many Lolas as possible to avoid drowning in a sea of mass media. 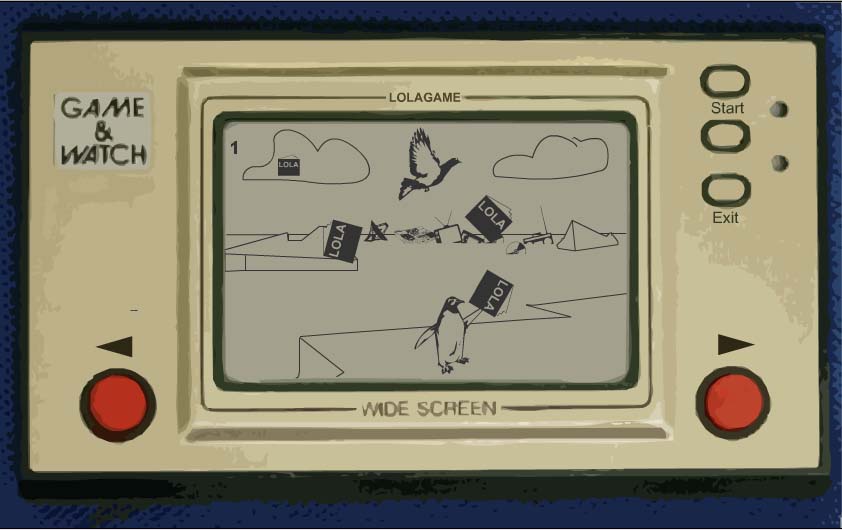 please to meet you
hope you guess my name


Give a capuchin monkey a cucumber slice, and she will eagerly trade a small pebble for it. But when a second monkey, in an adjoining cage, receives a more-desirable grape for the same pebble, it changes everything. The first monkey will then reject her cucumber, and sometimes throw it out of the cage. Monkeys rarely refuse food, but in this case they appear to be pursuing an even higher value than eating: fairness.

The capuchin monkey study, published last week in Nature, has generated a lot of interest for a scant three-page report buried in the journal's letters section. There is, certainly, a risk of reading too much into the feeding habits of 10 research monkeys. But in a week when fairness was so evidently on the ropes — from the World Trade Organization meeting in Cancún, which poor nations walked out of in frustration, to the latest issue of Forbes, reporting that the richest 400 Americans are worth $955 billion — the capuchin monkeys offered a glimmer of hope from the primate gene pool.

The study's implication that we are, to some extent, hard-wired for fairness speaks with special force to the legal system. American law has undergone a transformation in recent years, led by conservative Supreme Court justices and scholars, away from a focus on broad principles of fairness and toward a willingness to subject people to treatment that might be unjust, on the grounds that it is legal. The monkey study suggests, however, that fairness might be more than a currently unfashionable legal concept. It may be integral to who we are.

Sarah Brosnan and Frans de Waal, researchers at the Yerkes National Primate Research Center at Emory University, chose capuchin monkeys because capuchins are among the few primates — along with men and chimpanzees — that hunt cooperatively. Team hunting has evolutionary advantages, allowing a species to capture prey, like squirrels, it otherwise could not. In many monkey societies the dominant male eats what he wants, and the others fight over the scraps. But in societies like those of capuchins — and humans — in which hunting is done cooperatively, food is more equitably distributed.

The reason for the sharing is obvious. Cooperative primates will be reluctant to engage in a group hunt if they cannot be assured that their reward will be properly related to their efforts. The capuchin monkeys in the study did not care merely about rules: it was not enough that they were given a cucumber slice when that was what they expected. They also wanted the rule that was applied to them to be, in a larger sense, fair.

What role an inherent, human sense of fairness should play in the law is a critical issue today. In the "rights revolution" of the 1960's, the Supreme Court found broad fairness principles throughout the Constitution — strong rights to equal protection and due process, for example, and an expansive notion of what it means to be free of cruel and unusual punishment. The court brought these fairness principles to every corner of society, from schools, to prisons, to welfare offices.

Today, in law's eternal battle between strictly applied rules and broader principles of fairness, the pendulum is rapidly swinging back toward strict rules. Earlier this year, the Supreme Court considered the case of Leandro Andrade, a father of three who, because of California's harsh "three strikes and you're out" law, was sentenced to 50 years to life for stealing $153.54 worth of videotapes. The court's four liberals protested the unfairness of the sentence, arguing in dissent that if it was not "grossly disproportionate" to the crime, and therefore a violation of the Eighth Amendment's bar on cruel and unusual punishment, "the principle has no meaning." But the court's five-justice conservative majority concluded, in effect, that rules are rules, and that the sentence "was not an unreasonable application of our clearly established law."

In death penalty cases, criminal appeals, discrimination suits, the conservative majority regularly shows an indifference to the sort of fairness claims that would have prevailed in the 1960's. Lower federal court judges are also engaged in heated battles between rules and broader fairness principles, notably over the federal sentencing guidelines. The guidelines can pressure judges to impose sentences that, given the facts of a particular case, would result in unfairness. But the Justice Department, egged on by Republicans in Congress, is collecting data on judges who give lighter sentences than the guidelines recommend, which critics say could be used to create a blacklist.

Legal philosophers have long debated whether there is such a thing as natural law — higher principles of fairness that trump the rules enacted by man — and if so, from where it is derived. To natural law proponents like St. Augustine, who said an unjust law is no law at all, the answer was God. The capuchin monkey study suggests, however, that part of the answer may be biological. It hints that, as Mr. de Waal puts it, "a lot of the notions we use in our moral systems are much older than our species."

None of this, of course, means human society is destined to be fair. We are also hard-wired for competition and aggression. And we have a tendency to establish societies in which, as Shakespeare observed, "to do harm is often laudable, to do good sometime accounted dangerous folly." But the capuchin monkey study suggests that fairness is at least part of the mix of traits that go with being human — and that over time, higher notions of justice that look beyond mechanical application of rigid rules may have a fighting chance.

In Stanley Kubrick's "2001: A Space Odyssey," an ape-man throws a bone he has just used as a weapon into the air and it is transformed into a spaceship. The discovery of weapons was certainly, as the movie indicates, one of our key evolutionary moments. But the capuchin monkey study is a welcome reminder that the first time an ape-man angrily picked up his food allotment and threw it into the air because it was unjust was no less pivotal to the emergence of what it means to be human.

Children's books that didn't make it:

* The Boy Who Died From Eating All His Vegetables
* Fun four-letter Words to Know and Share
* Let's Run with Scissors
* The Kids' Guide to Hitchhiking
* Curious George and the High-Voltage Fence
* The Little Sissy Who Snitched
* Grandpa Gets a Casket
* Whining, Kicking and Crying to Get Your Way
* You Were an Accident
* Things Rich Kids Have, But You Never Will
* Pop! Goes The Hamster...And Other Great Microwave Games
* Your Nightmares Are Real
* Why Can't Mr. Fork and Ms. Electrical Outlet Be Friends?

Back to Muzika
Reply to quoted posts     Clear