QUOTE("BBC")
He gained two Oscar nominations for the iconic release, and was awarded an honorary Academy Award for his life's work in 1995.
He was also nominated for the top prize at the Cannes Film Festival, the Palme d'Or, five times between 1960 and 1982.
The director died peacefully at home on Tuesday night, his wife, actress Enrica Fico, told La Repubblica newspaper.
Film critic Kim Newman paid tribute to the director, calling him an "important and fascinating film-maker".
Newman said Antonioni's best films were all concerned with "how awful Italian post-war society is, and how trivial and superficial everybody has become".
"But the films are so beautiful and the people in them are so gorgeous, you can't but feel, well, it would be really great to be alienated, lovelorn and miserable like that."

Antonioni was born in 1912 in Ferrara, a small town in the north-east of Italy.
He studied economics at the University of Bologna, but came to attention as a film critic when he savagely criticised the Italian comedies of the 1930s.
In the 1940s, he enrolled at Centro Sperimentale, Italy's national film school, and soon began working as a scriptwriter, collaborating with directors such as Roberto Rossellini and Enrico Fulchignoni.
His debut feature film, Story of A Love Affair, was released in 1950, but he did not achieve international success until L'avventura (The Adventure) in 1960.
The film, which won the special jury prize at the Cannes Film Festival, tells the story of a group of couples who take a boat trip to an island off the coast of Sicily.
Its premiere at Cannes was a disaster, with the audience jeering the film, but the critics loved it, and L'avventura went on to be acknowledged as a classic.

One of Antonioni's key themes was man's inability to distinguish between appearance and reality, and his films largely dispensed with traditional narrative structure.
In 1966, he signed a deal to make a trilogy of films for the English market with legendary Italian film producer Carlo Ponti.
The first of these was Blow-Up, in which a photographer appears to have uncovered a murder in his photos.
Shot in London, and starring David Hemmings and Vanessa Redgrave, it was his biggest international hit.

In 1985, the director suffered a stroke that left him partially paralysed, but he continued to work behind the camera.
"Filming for me is living," the director said.
His last cinematic release was 2004's The Dangerous Thread of Things, one part of a trilogy of short films released under the title Eros.

A funeral will be held for the director in Italy on Thursday. 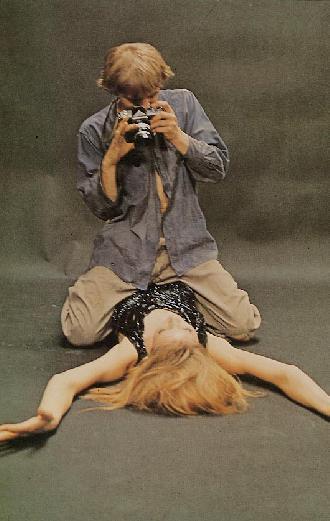 QUOTE(First Ingmar Bergman now Michelangelo Antonioni)
... I'm hunting parallels between Bergman and Antonioni. Thankfully there are some obvious ones. Both were near contemporaries who came to epitomise the foreign-language film scene during its creative and commercial heyday in the 1950s and 60s. Both were regarded as rigorous, high-minded directors who typically chose to focus on modern man's sense of alienation in a God-less universe. Both, to their detractors, could be aloof, portentous artists who made great demands of their viewer ... and all in return for the stark revelation that we are all lost and lonely and doomed to die. Gee, thanks a bunch.

And yet these directors were very different too. If Bergman was the great high priest of the European art-house, then Antonioni was its puckish intellectual. His films were at once more playful and more spare than Bergman's. L'Avventura and L'Eclisse are cerebral, teasing puzzle pictures. Blowup is a roguish, vogueish mystery play. Zabriskie Point offered a freewheeling, anthropological tour of an American counter-culture that - one suspects - never really existed outside of Antonioni's head to begin with.

I also feel that Antonioni has aged less well than Bergman. Perhaps it is the fate of all "modernists" to eventually turn antique, or even retro, and through no fault of his own Antonioni seems finally to have been too fashionable, too much an index of his age, so that his cool inquiries can now look a little mannered and arch.
...
Xan Brooks
http://blogs.guardia..._antonioni.html