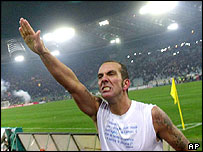 Roma will meet with Antonio Cassano’s agent on Friday in their latest attempt to extend his contract.

Giallorossi officials will entertain Giuseppe Bozzo in a desperate assault to not lose their £20m signing for nothing next summer.

Cassano is only tied to the capital outfit until June 2006 and the two parties have so far failed to iron out any sort of deal.

With the player’s much anticipated transfer to Juventus failing to materialise, Roma are now focused on reaching some sort of agreement with the talent.

The main stumbling block in negotiations is the vast amount of difference between the club’s offer and the player’s desire.

The 2001 Scudetto winners are ready to hand the former Bari sensation a five-year contract worth around £2.4m a season.

However, the highly rated Cassano is looking for a contract worth around £3.4m for each term.

A solution could be found if Roma agree to insert a release clause which would allow the player to leave at the end of this season for between £6m and £8m.

That would allow the club to not lose Cassano for free and would ensure that the starlet plays regularly in World Cup year, rather than watch most games from the bench as ‘punishment’ for not extending.

Roma are hopeful a deal can be done and club official Bruno Conti is confident that the player has archived his tough summer.

"Antonio is re-finding his serenity and we are optimistic about the future," he stated.

REGGIO CALABRIA, August 28 (Serie A) - Roma's bid to put the nightmare of last season behind them got off to the best possible start on Sunday as they cruised to an impressive victory at Reggina.

The 2004/05 campaign was one to forget for the Giallorossi. They had four coaches, crashed out of the Champions League at the group stage in disgrace following crowd misdemeanours and flirted with relegation from Serie A before finally finishing eighth.

Former Udinese coach Luciano Spalletti was brought in to restore some order to a seemingly unruly squad and the early signs appear promising, certainly on this evidence.

Roma looked assured and confident and were worthy winners.

Alessandro Mancini put the visitors ahead on the half hour mark and Daniele De Rossi doubled the lead immediately after the interval.

Reggina's chances of getting back into the game were effectively ended by the 63rd-minute dismissal of Carlos Paredes for a needless and indisciplined elbow in the face of Simone Perrotta.

Shabani Nonda, a summer recruit from Monaco, added the gloss on a fine day for Roma in the final minute.

Spalletti would have demanded a good start from his charges and they obliged by getting on top in the early stages.

Indeed, they could have taken the lead in the third minute when Francesco Totti, so long Roma's talisman, missed the target from the edge of the area after a fine cross from Christian Panucci.

Perrotta was next to try his luck but shot over the bar from 15 yards.

Giovanni Tedesco threatened Roma's domination with a shot which Gianluca Curci saved easily before Roma got back on top only to be denied by home keeper Ivan Pelizzoli's save from Rodrigo Taddei's effort.

It was a brief reprieve for Reggina as Roma went ahead from their next attack.

Amaranto defender Gaetano De Rosa lost possession near his own area to Vincenzo Montella, whose lob was partially saved by Pelizzoli and Mancini gratefully tapped the rebound into an empty net.

Totti could have made it 2-0 seven minutes later but shot straight at Pelizzoli from a good position.

Roma were well on top and Montella ought to have done better than shoot wide five minutes before the break.

There must have been concern at the interval that those wasted opportunities would come back to haunt Roma but Spalletti's half-time team-talk obviously did the trick as they moved further ahead just after the resumption.

Totti's free-kick picked out De Rossi and the young midfielder burst into the Reggina area before slipping the ball through Pelizzoli's legs and into the net.

Reggina's target this season is to avoid the drop but they will have to improve both their play and self-control if that objective is to be achieved.

At two-goals behind, they were still in the match but the sending-off of Paredes killed their hopes.

Tedesco, easily Reggina's best player, did his utmost to spark a revival, forcing Curci into a fine save before creating another chance for Rolando Bianchi.

But fittingly it was Roma who had the final say when Nonda, a 73rd-minute replacement for Montella, marked his debut with a goal after more fine work from Totti.

Back to Navijači
Reply to quoted posts     Clear